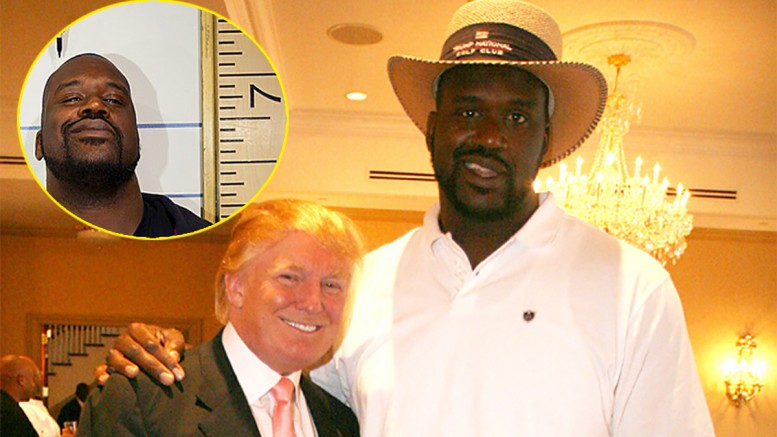 After President Elect Trump’s landslide victory on November 8th, in burgeoning administration is scrambling to enact some of the changes that he has promised. Perhaps his most prominent promise is to build a wall on the border to Mexico in order to keep illegal immigrants from coming into the country. This wall has been incredibly divisive and has led many to ridicule even the possibility of building it – but now it seems Trump is taking his first steps to making the plan more concrete – and he seems to be doing it in a very surprising way. On Friday morning, Trump met with former NBA star, Shaquille O’Neal, a 7’1″ foot giant, and according to Trump, it was in order to measure him and get an idea of just how high the wall should be. This is what Trump had to say to Fox News about the meeting:

”Look, we’re going to have a tremendous wall, it’s going to be like nothing you’ve ever seen, okay? But in order to make that a reality, I needed some big league people to help me. Now, I’ve known Shaquille for years, tremendous guy, and I thought I’d get him to be a model for how high the wall should be, because believe me, he’s a big guy. After meeting with him, I know how tall the wall is gonna be, and believe me, as Shaq would say, aint’ nobody gonna get over that wall.”

Shaquille O’Neal only made a short comment to Fox reporters:

”When Trump called me to get my measurements, I couldn’t say no, this guy gonna be president”.

The wall is still in the planning stages, but if Trump is planning to make it around the height of Shaquille O’Neal, Mexicans trying to enter the US illegally, will have a very hard time.